Just an FYI....At 3:14pm EST Space Shuttle Discovery landed at Runway 15 at the Kennedy Space Center. It marked a successful mission and was as always a picture perfect landing.
Posted by Zachary Burns at 5:46 PM No comments:

As you may (or may not) know, I'm a fan of severe weather. Yeah, sunny days are nice, but there's nothing like watching a summer storm roll in. Today I was joined along with over 500 other individuals for the yearly Skywarn renewal training class. It's a pretty broad class covering items that the National Weather Service Office in Cleveland, OH wants reported during severe weather outbreaks (damaging wind, flash flooding, hail, snowfall, etc).

Along with normal means of communication (phone, Internet, cellular, etc) once a severe weather warning has been issued, the Toledo area (Skywarn District 1) Ham-Radio repeater network is activated and Ham Radio operators begin assisting the National Weather Service in tracking and reporting the storm. This along with other measure give us direct access to meteorologits in Cleveland, OH so we can report potential life and property threatening weather.

You can obtain more information about Skywarn by visiting www.skywarn.org
Posted by Zachary Burns at 2:18 PM No comments:

Microsoft finally released Internet Explorer 8. It's pretty close to IE7, but is more standards compliant. We've ran into a couple of clients that have some old IE6 and IE7 compatibility issues when rendering since some hacks were put in to deal with IE7 way back when.... In a pinch we enabled the IE7 compatibility mode on the website so it would work for them without any redesign and they've been quite happy with the results - everything renders just fine. So I would say go ahead, IE8 has my stamp of approval for anybody that wants to install it.

Just incase anybody wants to know the compatibility mode settings, I've summarzied them below (for you other web developers out there). There are essentially 3 ways to turn on compatability mode without any user interaction: Per Web Page, Per Web Application, or Per Web Site...


Per Web Application works like the following web.config file example:

You can also configure IIS 7 on a Windows Server 2008-based computer to include a custom HTTP response header by following these steps:

Click Start, click Administrative Tools, and then click Internet Information Services (IIS) Manager.
In the connections pane, expand the node for the server, and then expand .
Click the Web site where you want to add the custom HTTP response header.
In the Web site pane, double-click in the section.
Under Actions, click Add.
In the Name box, type X-UA-Compatible.
In the Value box, type IE=EmulateIE7.
Click OK.
To configure IIS 6 and earlier versions to include a custom HTTP response header, follow these steps:


Apache Administrators would do the following:

Well I finally hit 35 years old last weekend and my wife bought me a Dell Mini 9" ultra-portable laptop for my birthday. I wonder how she knew?

When unboxing it, the first thing you notice is how small and light it is (less than 2 pounds). I fired it up and removed all the crap that they ship with it (except the webcam application - that's fun to play with). It boots up pretty quick and the screen is clear, bright and very easy to read. The keyboard takes a bit of getting used to but it's pretty usable. 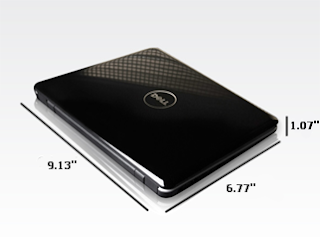 I got the unit with 1GB of memory and the 8GB SSD (Solid State Drive) and when it's running you hear NO noise whatsoever. None! I have it on my night stand and hear nothing!

Today, I'm backing it all up - I have it all setup with Windows XP, Slingbox, Firefox, etc and I'm going to install Mac OSX on it for testing some development work I'm doing. That'll take a little bit of time, but should be a lot of fun.
Posted by Zachary Burns at 10:40 AM No comments:

Here at Burns Software we're fascinated by the United States and International Space Programs. It's very rare that we get to see the live launch sequences, and all the things and people that make it a successful mission.

Today I got the chance and the launch window fit into my schedule, so I decided to sit and watch the STS-119 Space Shuttle pre-launch and launch events. It's all a wonder it works! But recalling from my days as a private pilot, you've gotta have the checklist and a good crew! :)

Here's a view at the T-Minus 9:00 hold pattern from the developer lounge here at Burns Software. 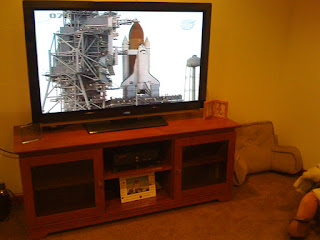 Just for those that missed it, it was a beautiful launch! You can check out some footage over at www.nasa.gov. God speed Discovery and good luck accomplishing your mission objectives. We support you!
Posted by Zachary Burns at 7:38 PM No comments:

I'm normally not a big fan of Sony. In any way what-so-ever! (I can go into it if you want, but I won't for the simplicity of this post.)

Anyway, back in 2004, Amy bought me a Sony mini-DV Handycam. It was and still does have an excellent Carl Zeiss lens. It took pretty good standard definition movies.

This camcorder would get pulled out on Christmas, birthdays, etc for shooting some home movies and until recently we just stopped using it. Well, back when Sydney went to Safety Town I had to work so I asked Amy to record the production. When she brought it home she said she had problems taping the performance, but she finally got it working. But I noticed that during playback the screen was playing green pictures and cutting in and out. I was chewing Amy out saying how bad of a photographer she was, etc, etc.

Well, I just so happened to plug this camcorder in today and was going to get some of the DV recording for some compilations and noticed that the Camera portion was just recording black. The audio worked, the LCD screen playback worked, etc. The only problem was recording.

So I hopped on Sony's site and after some digging noticed a post back in 2006, that they finally acknowledged a problem in the CCD sensor and my unit was exhibiting the same issues. The bulletin says they'll repair the unit for cameras with this issue until March 31, 2009. Holy smokes! I might get lucky. I filled out the form, paid the $15.00 shipping fee and am awaiting a UPS label that Sony's shipping me. Awesome!

This might actually get me to change my mind about Sony! Wish me luck.
Posted by Zachary Burns at 3:42 PM No comments:

As you know, here at Burns Software, we do more than just software development. We do it all from web hosting, to server building and maintenance, web development, iPhone development, you name it - we do it!

Anyway, we've got several internal servers here for production and development work. I was doing some video production (yes - we do that too) last night and when uploading it to our backup server it was taking way too long over our 100M-bit network. It was getting kinda late and I didn't feel like digging into the problem, so I went to bed and woke up this morning headed down to the basement (were our data center is) and noticed the following on one of our servers.... 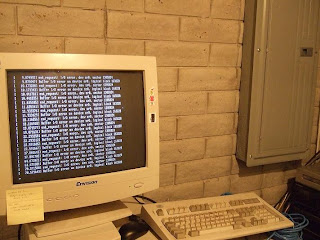 Oh great! Looks like I've some some hard drive issues. So that's my chore today - to make sure I get the data off the mirror and over to another place before swapping out the hard drive and putting a new one in. (I like to make double sure I've got the data in more than 1 location - just in case - I've been burned by hardware before!)

Anyway, the wife has a birthday dinner scheduled for5:00pm tonight and I'm trying to wrap it up by then. Another thing I noticed was that some of the rats nest I have going on for the video distribution network (below). I've got to clean that up before it gets worse! 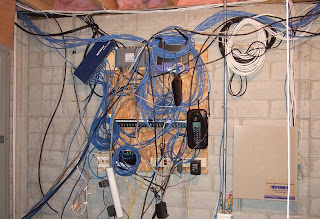 Posted by Zachary Burns at 1:53 PM No comments: