Microsoft - You Still Make Me Crazy!

So today was a rather big day for Microsoft. They finally shipped Visual Studio 2010 after more than 2 years of development. I still see some performance issues, but the one thing that drove me crazy during the install is a restart...there's simply no reason for it! 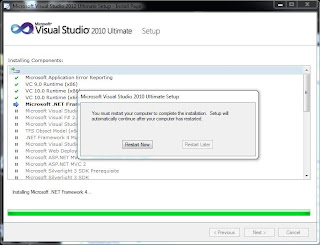 I've had the ISO mounted as a virtual DVD drive and also downloading some of the other VS2010 bits - I had to suspend all that, restart, then remount it, and continue...it's little stuff like this that drives me nuts.
Also Microsoft, if I were you, I'd consider NOT linking to content from sites like Twitter, Digg, etc. directly on the front page of MSDN. The comments weren't very flattering from sites like Twitter and the like, after the horrendous download speeds on the MSDN site today. You're still a business and you've got to maintain professionalism and filter some of negative and graphic content - even in the social media age. And how could you not get the CDN's involved to help distribute the load more geographically? Hello - it's 2010!
Posted by Zachary Burns at 9:07 PM