Apple - Admit You Screwed Up With IOS7

I'm a long time supporter of Apple, but you really "screwed the pooch" with IOS7.  I'm not mad about the user interface, it needed to be done, and took a little while to get used to, but my compliant is the battery.

I've watched battery usage on the iPhone 5 literally die (from fully charged at 100% to 3%) with very limited use.  I've plugged in Apple and Non-Apple cables and both have stated they are not designed to charge the phone - and refused to do so.  Even using Apple certified equipment the phone refused to charge in a wall wort plug overnight.  That pissed me off.

I've done factory resets of the software, etc - nothing helped.

So I've reverted to iOS 6.1.4 and will live with that until the contract with Verizon is up.  I may, just may consider jumping ship to Android.  They've finally got their act together, and I'm concerned Apple has lost their way.  This update showed it.

I know you've got some upset customers over the battery and cable issue - you probably should address that quickly!
Posted by Zack at 9:33 AM No comments:

Microsoft MSDN - Does this Make Sense?

How does the act of getting a serial number (that I'm entitled to) - cause a security issue?

Gun debate rages on....again. I have the easy answer.

Do you speed in your car?  I bet you do....well that's against the law.  You're just rolling the dice that you won't get caught.  Same rules apply for guns.  Just because there is a sign on a door stating no guns, that's not going to stop some crazy psychopath from entering a building and shooting it up.  You can create laws banning and taking away all kinds of stuff, but it's not going to stop bad people from doing bad things.

If a bad guy things you might be armed, then maybe he'll think twice from entering a building and getting taken out by a concealed carry holder.

Of course, most of the psycho's out there - they have some major mental issues, and unfortunately, our government buracracies are not taking care of the problem and vetting the people they should be well enough.  Just too much government. Make smaller government, and we'll have smaller problems.  But that's another post in itself.
Posted by Zack at 9:40 AM No comments:

Wow! Wish I could sit at work and play games!

Wow, I wish I could sit at work, and play games. (Instead of deciding the fate of thousands of military troops entering a country we have no business in). Why do we keep re-electing these clowns? 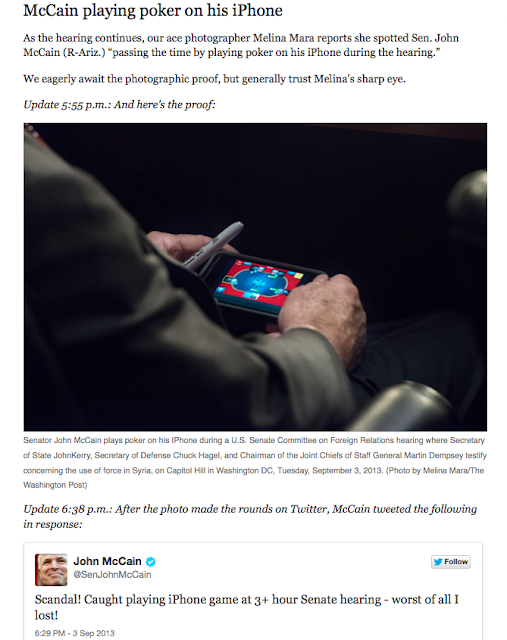 September 1, 2013....Now you know the reason I don't use Facebook - it was easy to see the writing on the wall years ago!

"The new Facebook advertising policy: 'Our goal is to deliver advertising and other commercial or sponsored content that is valuable to our users and advertisers. In order to help us do that, you agree to the following: You give us permission to use your name, profile picture, content, and information in connection with commercial, sponsored, or related content (such as a brand you like) served or enhanced by us. This means, for example, that you permit a business or other entity to pay us to display your name and/or profile picture with your content or information, without any compensation to you. If you have selected a specific audience for your content or information, we will respect your choice when we use it.' — Facebook also made it clear that the company can use photo recognition software to correctly identify people on the network. It said: 'We are able to suggest that your friend tag you in a picture by scanning and comparing your friend's pictures to information we've put together from your profile pictures and the other photos in which you've been tagged.' — It [Facebook] said it was also clarifying that some of that information reveals details about the device itself such as an IP address, operating system or – surprisingly – a mobile phone number.
Posted by Zack at 12:08 PM No comments: