Administration Has No Clue

Another example of a clueless administration and government waste - how much is this going to cost now to fix it?

Americans - you've had health care!  You didn't need this Obamacare crap.  Show up at a hospital - they'll fix you up - no questions asked.

Need a doctor, no problem, show up to a doctors office.  They'll be happy to bill you.

Just look at other government run programs - all failures....the United States Post Office, Social Security, Medicare.  All these programs are a classic Ponzi scheme - they need money coming in to sustain the money going out - that's a classic scam.

This whole federal government shutdown is such a scam.

Personally, I love it being shutdown, when the government is in a crisis and tied up in gridlock, it makes me happy.  Why?  Easy, no new laws are created by people that just don't understand the average everyday citizens needs.  So laws aren't created that hamper business, or citizens' rights.  Fine by me.  Keep it shutdown - I'm sure at least 50% of those federal workers are not necessary anyway - so let's fire them and keep the tax dollars in my pocket!  The government works for the people - not the other way around!!

Anyway, as a software/web developer, what's great about the World Wide Web?  You can take information and provide it to end users without somebody being at the server's end.  I've got servers running 24/7/365 that haven't been touched by human hands in years.  They continue serving up static and dynamic content from large databases without a hitch.

I had to check out some frequencies that were causing potential interference - so I went to the FCC's website to track down the owner.....when I see stuff like the following from the FCC and FTC, it's a scam.  The current administration is a joke and thinks it's citizens are as well.  There is no reason the shutdown hampers a site that's able to run 24/7 - that's the beauty of the web. 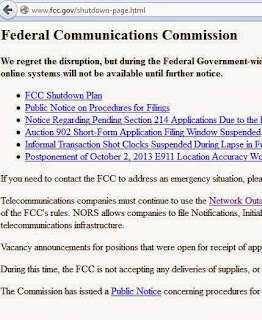