So I recently have the need to talk to a serial port on Linux (/dev/ttyS0) and with Delphi Tokyo 10.2 recently released with native compilation for Linux, I decided to give it a try.

I have a Slackware 14.1 box that I'd like to try it on - because that will be the production box.  So I figured I'd give a simple application a test and see what happens on a test Slackware 14.1 machine.

It was late in the day (5:00pm or so) and I hit the Tools->Options->SDK Manager, connected to PAServer running on the Slackware box and let it go and walked out the door.  Typically this takes 5-10 minutes.

When I came back in the morning (15 hours later), I noticed it was still building (sorry for the pictures, didn't think I'd be making a blog post about this). 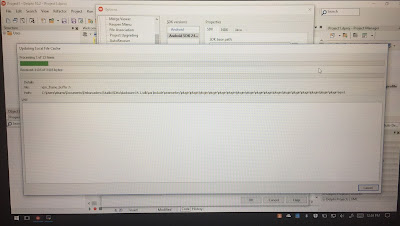 Well, that doesn't look right.  Let's log into the Slackware box and see what's going on.

I noticed in "/usr/include/seamonkey" and "/usr/include/mozilla" there were symbolic links of directories pointing back to itself (like shown above, one was called "plugins") and there were a few others.  I wonder if that's what PAServer is compiling....it must be stuck in some recursive loop.

I must have installed X Windows on this box, but I don't use it, so I uninstalled XFCE and X, etc.

I then re-attempted the Slackware 14.1 SDK addition, and after a while, it worked! 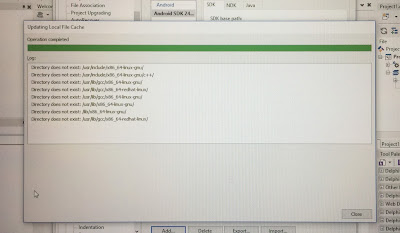 Cool, let's try to compile, build and deploy something again. 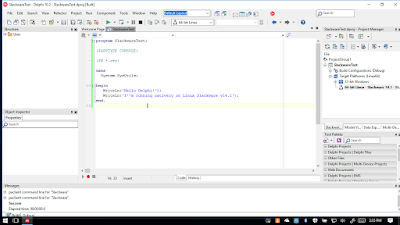 I "cat-ted" out the result - just so you could see it's not snake-oil - it's a real binary!

Well, that works out great!

I did some digging and noticed the there's no RTL for serial communications - which I was surprised, to find, but I think I can cobble together something to get it to work - even if I have to go down a TCP/IP to Serial bridge - I'll get it to work.

Some of you may be asking, Delphi?  Why?

Well, I live most of the day in Visual Studio as a C# Developer, but have always had a strong love of Delphi (it was my first real RAD environment back in 1995 with Borland Delphi 1.0) on a Windows 3.1 (and shortly thereafter Windows 95) machine.

Recently, I had the business need to develop a few internal mobile applications for 125 employees.  I tried it in Visual Studio with Xamarin.  What a mess!  (To put it nicely.)

I need professional tools that help me develop fast.  I can't wait for months while Alpha and Beta builds of Xamarin were released fixing some stupid bug.

The ability to just throw up a form, drop some controls on it, deal with the layout of different devices - Delphi wins this hands down.  Literally in minutes I can have a prototype of an application, while Visual Studio and the Xamarin environment are still pulling down crap code from repositories or nuget or whatever the heck it is doing!

Anyway, I could rant all day about this, but it's not the point of this post.

Thanks Delphi!  I'll report back and let you know how this project worked when done.
Posted by Zack at 11:20 AM